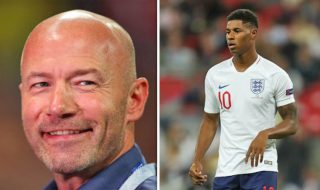 Alan Shearer has said Marcus Rashford will struggle for game time as a central striker under Jose Mourinho as Romelu Lukaku will always be picked ahead of him.

The former England international questioned how many times Rashford has started up-front since Lukaku moved to Old Trafford.

That’s all well and good when you’re making a point, but realistically Lukaku is a much more complete centre-forward than Rashford. How is it wrong of Mourinho to pick his best players?

Moreover, Shearer is convinced Mourinho will always play with one striker and this will always be Lukaku.

“Of the 126 appearances Rashford has made for Manchester United, I am not sure how many have been in his favoured position as a striker,” he said in his column for The Sun.

“The problem here is what can he do about it?

“Yes, he is still very young at 20, but when will his situation change?

“As long as Romelu Lukaku stays fit he is not going to get a starting spot as the lone striker at Old Trafford.

“As long as José Mourinho is the manager, there is not going to be two up top.”

He’s probably right but Lukaku was signed while Zlatan Ibrahimovic was still at the club. The manager knew Rom was the right player to lead the line, with a great deal of responsibility on the flanks for attacking players to support the front man.

Rashford does not have the same physical attributes and ability to read the game as Lukaku and is currently seen as more of a wide-attacking player at United and faces stiff competition from Alexis Sanchez and Anthony Martial for a starting spot.

This is a player who joined the Manchester United academy at the age of seven and was promoted to the first team in 2015-16, under the management of Louis van Gaal, who initially played Rashford as a centre-forward.

He made his debut in the Europa League round of 32, scoring twice against FC Midtjylland in a 5-1 win. Three days later, he made his Premier League debut against Arsenal and again scored a brace in a 3-2 victory at Old Trafford.

His record as a United player currently stands at 32 goals from 132 games.