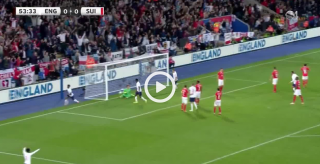 Marcus Rashford has added to his tally for England by scoring two goals in four days.

The Manchester United striker opened the scoring for the Three Lions against Switzerland after 53 minutes of play.

The two sides were level at the interval, with the first-half consisting of end-to-end football. Switzerland arguably had the best chances of the half but were unable to take advantage of them.

READ MORE: Southgate reveals how many games Shaw will miss for Man Utd

After being sent off in his last game for United, it’s good to see Rashford put the negativity behind him and get his name on the scoresheet.

Rashford is certainly giving Jose Mourinho something to think about for when he returns from his recent suspension (three games for a straight red).

The England international faces stronger competition for places at United, with Alexis Sanchez currently occupying the left-wing role. Anthony Martial is another that Rashford comes up against in the pecking order at Old Trafford.

This will give Mourinho a selection headache.

More of the same, Rashers!