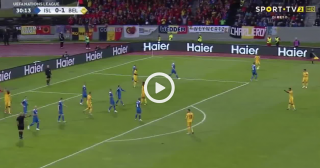 Romelu Lukaku has continued his terrific goalscoring form for Belgium against Iceland by adding to the scoring 31 minutes into their UEFA Nations League clash against Iceland in Reykjavik.

Roberto Martinez’s men went into the game after a fine 4-0 win over Scotland, but Erik Hamren’s reign as Iceland boss got off to the worst possible start after a humiliating 6-0 defeat at the hands of Switzerland.

The scoreline is currently 2-0 after Chelsea star Eden Hazard grabbed the opener from the penalty spot. Then, minutes later Lukaku doubled Belgium’s lead.

Lukaku was the in the right place at the right time to hammer home and increase Belgium’s lead.

When Manchester United take on Watford this weekend we will all be hoping our front man can add to his tally for the season.

It’s important to our season that Lukaku hits the ground running as soon as possible. He’s our main outlet up front and what we’re seeing on the international stage is certainly promising.

That’s 42 Belgium goals in 77 games for Romelu Lukaku. A minimum 20-goal a season striker but has to step up now. Could be a great #mufc goalscorer but hasn’t scored 30 in a club campaign and last season was blemished by those important chances vs Liverpool and City.