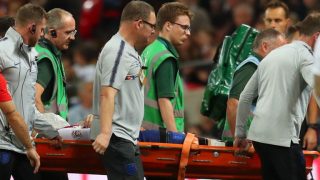 England manager Gareth Southgate expects Luke Shaw to miss one game for Manchester United as he recovers from concussion sustained whilst playing for the Three Lions.

Shaw put in an impressive performance in England’s game against Spain in the Nations League before having to leave the field with a nasty head injury.

This looked worrying for the 23-year-old defender, who had only just made it back into the England fold after a fine run of form for United this season.

READ MORE: MUFC Podcast: Football coach on Mourinho and who should replace him when the time comes

One of the most important players for United so far this season, Shaw has done remarkably well to win back the trust of manager Jose Mourinho, who had previously slated the left-back publicly.

Speaking about Shaw’s recovery, Southgate seems optimistic that the former Southampton defender should only miss United’s next game against Watford on Saturday evening.

‘All being well, he has a mandatory seven-day period that he has to serve with the concussion, but he should be back in the fold as soon as that’s done,’ Southgate is quoted in the Metro.

The Reds will hope he can quickly re-establish himself in Mourinho’s side again after that after showing his true potential in recent weeks.

Mourinho is expected to be asked about Shaw during Friday’s press conference.