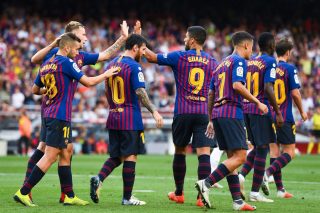 According to Don Balon, comes as a result of a lack of progress made in contract negotiations between Alba and Barcelona.

The 29-year-old has undoubtedly been one of the finest full-backs in Europe for the last few years, playing his part in much of Barcelona’s domestic success.

With four La Liga titles and the Champions League among the trophies Alba has won during his time at the Nou Camp, it shouldn’t be a surprise that Mourinho might want that kind of experience in his squad at Old Trafford.

The only surprise concerns Luke Shaw, United’s right-back, who has been tremendous since the start of the season.

While there were calls for a new left-back in the summer, with Juventus defender Alex Sandro heavily touted as a prime target, there doesn’t seem a huge need for Alba.

Don Balon also suggests Lionel Messi wants Alba to remain a key part of the Barcelona squad due to their strong relationship. And that part alone would suggest to me the Spanish international may be about to use United’s name to get a bigger and better contract out of Barça.