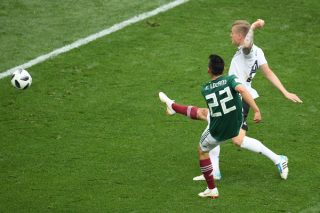 Manchester United will face stiff competition if they want to land PSV Eindhoven winger Hirving Lozano, according to AS in Spain.

The Mexican, 23, impressed at the World Cup this past summer and is believed to be on the radars of Inter Milan and Borussia Dortmund, as well as Atletico Madrid and Barcelona.

Lozano was involved in the Mexico side that beat Germany and South Korea to progress from the group stage before being eliminated by Brazil in the round of 16.

He scored the only goal against Germany and his stock has unsurprisingly risen ever since.

So far this season, Lozano has scored two goals in four Eredivisie games.

Though last season, when PSV won the Dutch title, Lozano scored 17 goals and provided eight assists from a wide position.

United manager Jose Mourinho needs to start getting the most out of Anthony Martial or else look to alternatives in the market. Lozano is becoming a likely option for the Reds.