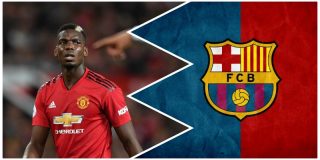 Barcelona could look to sign Paul Pogba on loan from Manchester United with the option of a permanent transfer due to Financial Fair Play problems.

This is according to El Chiringuito journalist Eduardo Inda, quoted on Don Balon, who add that Lionel Messi is keen on his club signing the France international.

It remains to be seen how practical any of this is, with United unlikely to be keen on allowing such an expensive player to leave without receiving a transfer fee immediately.

READ MORE: Will Mikel Arteta be a future candidate for the Man Utd job?

We’ve not seen Pogba at his best and the club would expect to have a replacement ready if they were to sell him in January or beyond. The current squad sees only Nemanja Matic, Fred, Ander Herrera, Andreas Pereira, Marouane Fellaini and Scott McTominay as other senior options in midfield.

Pogba was supposed to be the star piece in the midfield, but it just hasn’t happened for him in the English top-flight so far.

In my opinion, this is a trap United shouldn’t fall for… Barcelona are seemingly trying to pull the wool over our eyes by taking Pogba on loan to check if the Spanish game suits the Frenchman before making a definite decision.

If they truly want the whingebag, by all means, sort your FFP situation and hand us over the money in full. No messing about.