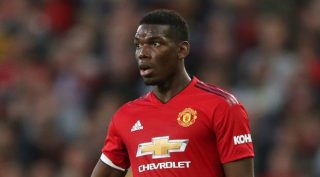 Upon returning to Manchester United Pogba has reverted to the patchy form he showed the last term.

Jose Mourinho gave the £89 million star the United captain’s armband in hope of it proving inspirational, but that has been anything but the case.

Much to the manager’s dismay, the following results were a shock 3-2 loss to Brighton and a heavy defeat at the hands of Tottenham.

Edgar Davids spent the majority of his career at Pogba’s former club Juventus where he won three Scudettos.

The former Netherlands international knows what it takes to be one of the world’s best central midfielders – something Pogba should be today given his tremendous attributes, but the Frenchman lacks consistency in his game.

Despite Pogba’s impressive performances for the national team, Davids wants to see the 25-year-old showcase more of his ability. Presumably, he means on a more consistent basis.

He told Canale 5, as per the Daily Star: “I am not at all convinced by Paul Pogba.

“He plays a lot in England, it’s true, but I expected a lot more from him.”

There was talk of Manchester United attempt to exchange Pogba for Juventus star Paolo Dybala this week.

Mourinho is said to be considering a £107 million move for the Argentine, according to various reports.

However, Davids is not convinced that Dybala has yet reached his full potential and could also work harder.

“Dybala is a great talent, but he has to work harder,” he continued.

“It is not always the fault of the coach or the game system, even the player must look in the mirror and do more.”

As things stand, I’d take the hand of Juve if they offered us Dybala. And I wouldn’t say no to a big offer for Pogba.