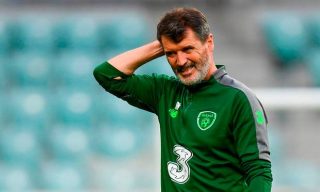 Manchester United legend Roy Keane looks to have done his reputation some harm with this extraordinary clash during a previous international break with the Republic of Ireland.

The midfielder was regarded as one of the best players in Europe during his peak with United, with his performance against Juventus in 1999 one of the best individual displays of all-time, but he has been unable to forge much of a successful career as a coach since his playing days came to an end.

Keane seems to be having real trouble controlling his temper (surprise, surprise!), as this leaked WhatsApp message sent to Stretty News shows.

Below is a full transcript as Burnley defender Stephen Ward explains how Keane clashed with Jonathan Walters and Harry Arter for their lack of effort in training and complaints about niggling injuries.

The Ireland assistant sounds like a difficult character to work with on the training ground, but Keane isn’t someone that likes to settle for second best.

Let us know what you make of the full transcript.

“So basically lads, Roy was getting on to the lads for not training three days in a row. Jonny’s got a bad knee so he can’t train all the time.

“They were at the training ground and him and Harry were just sitting on the bench, just relaxing and icing themselves and stuff. Roy walked over and was like, ‘Why aren’t you lads training?’ and he blatantly knew why they weren’t training because the manager would have told him and they were like, ‘We can’t do three days in a row’.

“‘What are you guys? Professional footballers? That’s a shambles that is.’ They both didn’t say anything and Roy walked off and came back over again: ‘So when are you going to train, I’m sick of people pulling out with injuries, what the f*** is wrong with ya?’ and the lads were like: ‘Listen, we’ve got problems, we do it at our clubs, we can’t do it.’

“Roy said something under his breath about Jonny and walked off.

“Jonny lost his head, jumped off the bench and walked after him, grabbed his arm and said: ‘What’s the story Roy? If you’ve got a problem say it to my face, don’t f****** walk off’ and he was like, ‘I do have a problem, you’re not training, you’re getting soft, it’s no wonder Dyche doesn’t play ya, you’re f****** always looking for an argument like you are now’ and he was like, ‘No Roy, you are the one trying to start an argument.’ And apparently they were squaring off to each other and having it off and had to be pulled off each other. All the lads were grabbing Jonny away from him … Johnny was going to kill him.

“Roy brought up something about when they were at Ipswich together, they had like a falling out as well. “You’re threatening me again Jon, like you did at Ipswich’, and Jonny was like: ‘Yeah, are you going to be a s******** again and send me my fine in the post rather than say it to my face?’

“It blew over for a few days and then they flew out to France and Jonny apparently just text Roy like, ‘Listen Roy, I’m in room whatever, if you wanna come up, you’ve obviously got something on your mind that pisses you off about me because it’s causing tension in the squad, let’s talk it out.’

“Apparently Roy just wrote back: ‘Nah, I’m just here to help players. People like you… stay out of each other’s way. You don’t need to reply to this message.’ And that was that.

“They got back from France and Harry felt his quad in training again. So he wasn’t training. Apparently he was getting treatment in the treatment room and Roy walked in and was like, ‘When are you going to train you f****** p****?’ And Harry was like, ‘What?’ and he was like: ‘Any chance of you training?’

“Apparently Roy was going mad getting worse and worse and Harry got up off the treatment bed and was walking back to his room. As he was walking back Roy was shouting down the corridor: ‘You’re a f****** p****, you’re a c*** you’ve been all your life’ and that was really it lads.

“It didn’t come to blows but basically just Roy losing his head.”

Without doing or saying anything, Mick McCarthy's position in Saipan becomes about 5% more understandable every year.

How hard is it to keep a positive atmosphere within a group for 3 days a couple of times a year ? Seriously where the fook does all this drama come from.