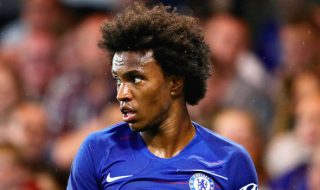 Chelsea star Willian has dismissed claims he was close to joining Manchester United and Barcelona in the summer.

The Blues faced uncertain times during the summer with Antonio Conte’s sacking delayed and players not truly knowing what was going on at the club.

In the end, it was only the latter who departed the club – with Courtois joining Real Madrid after going AWOL.

And Willian was reportedly close to a move to La Liga too after Barcelona made at least two bids for the Brazilian.

United have been tracking the 30-year-old for two years, with manager Jose Mourinho keen to work with his former player again. Willian even came out at one point to reveal he wants to work with Mourinho again one day.

Willian now denies that a transfer away from Chelsea was on the cards, as per the Daily Star.

“A lot of people they say a lot of things in the press, but I never said that I want to leave Chelsea, never,” he said.

“Always I say that I want to stay at Chelsea as long as possible, and I am happy to stay here.

“When I arrive here my plan was to stay here as long as possible and now I am here five years I hope stay five more!

“I know I have two years of contract left but I hope to stay more years in the Premier League.

“I am very happy to be here five years. I have won titles and played a lot of games with a lot of happy moments, and a few sad moments as well but that is part of football.

“But these five years have been very good for me and I am proud to be a Chelsea player.”

Chelsea have had a much better start than United in the new Premier League season. They join Liverpool, Tottenham and Watford at the top of the table with 12 points from a possible 12.