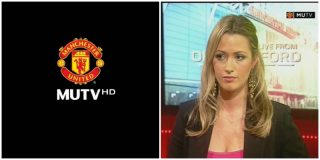 On this day 20 years ago, Manchester United’s official television channel (MUTV) went on air for the very first time.

This introduced broadcasting from a studio in the heart of Old Trafford. The station started just a few weeks into what would be the most successful season in our history so far, 1998/99.

Throughout the Treble-winning campaign, MUTV brought regular news and views from inside the club and its cameras were on the bus when Sir Alex Ferguson and his squad paraded the three trophies through Manchester city centre.

The official Manchester United YouTube channel has uploaded a video highlighting the best bits of MUTV from the past 20 years, though they missed out on an absolute golden moment. And we couldn’t let that slip (not a Gerrard reference).

McQueen, daughter of United legend Gordon, was joined in the studio by Gary Pallister and Paul Parker when the prank caller phoned-in to compliment Pally on the size of his fisherman’s friend.

Hayley has since moved on with her career and currently works for Sky Sports News. Her hard work has seen her become one of the most respected presenters in sport.