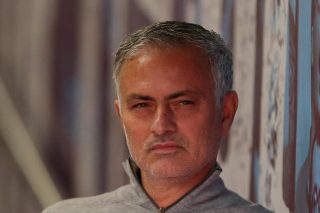 Manchester United new signing Diogo Dalot seems to be hinting that he could make his debut for the club in their upcoming Premier League encounter against Watford.

The Reds are back in action on Saturday as they travel to Vicarage Road for the late kick-off and it seems Dalot is ready to be involved.

The 19-year-old joined United from FC Porto in the summer as an exciting prospect to come in as Antonio Valencia’s understudy.

READ MORE: MUFC Podcast: Football coach on Mourinho and who should replace him when the time comes

Unfortunately, United fans have not been able to see the youngster in action yet due to some injury problems,  though it may be that he’s now fit enough to be involved in some way for our next few games.

Dalot tweeted about the game, saying he’s ‘getting read’ for Saturday, which sounds like he’s expecting to get minutes under his belt.

Have a good week everybody 🙌🏻 Getting ready for Saturday 💪🏻🔴⚪ @ManUtd pic.twitter.com/1tdspyIvOs

Going into the game, United won’t expect to be clear favours as per usual. Watford have a 100% record from their opening four games, including a dramatic win over Spurs, and they’re playing some really nice football too.

It could be a tricky first game for the Portuguese prospect, but fans will be delighted to see Mourinho take a risk on the youngster as the team needs a long-term replacement for Valencia, who, in all fairness, isn’t your ideal candidate for a full-back.