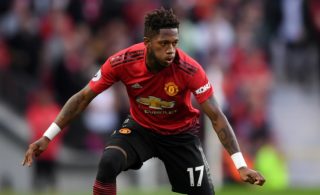 We can vouch for the vast majority of football fans when it comes to the overwhelming excitement that comes with a new signing. Fred joined Manchester United from Ukrainian side Shakhtar Donetsk, already in the process of establishing himself as a Brazil international, and initial signs of him in a Red shirt have been promising to say the least.

Of course, there are elements of his game that need improving. Fred needs to learn how much time he will be given on the ball in the English top-flight, but that’s something all foreign players need to come to terms with and we’ll most certainly give him time to adjust.

READ MORE: The internet is about to get less fun for football fans – you have 48 hours to save it

Other than that, the Brazilian midfielder looks busy. His willingness to get the ball forward with precision will benefit this side down the line and it’s no wonder he had offers from some many clubs, including last season’s Premier League champions Manchester City.

Our friends at Tifo Football have released a 5-minute video profiling Fred and we wanted to bring it to your attention.

The video takes a look at how United’s midfield was an area of concern and headaches last season, with manager Jose Mourinho trying to identify the best way to utilise his options. The boss was missing that third figure, so he gave Scott McTominay and run in the team and tested systems with Ander Herrera and Marouane Fellaini.

It didn’t quite work and something needed to change. A good campaign for Shakhtar saw Fred’s stocks rise and City were unable to secure his signing in January — the same way they lost out on Alexis Sanchez to United.

However, in a similar scenario, Mourinho eventually won the race to sign Fred for a big fee of £52 million. The Champions lost out again.

The video below shows insight into what system Fred became accustomed to playing last season with the Ukranian giants.