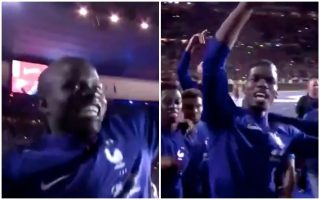 The World Cup champions secured a 2-1 win over the Netherlands in Paris on Sunday night and that in turn helped them enjoy their homecoming party.

France put on a bit of a show for their fans but goals from Kylian Mbappe and Olivier Giroud sealed the victory in their opening UEFA Nations League clash, but the game was the first at home since Les Blues win the prestigious World Cup this past summer.

They evidently planned to celebrate with their fans after the game – many of which didn’t travel to Russia – and after sealing three points against Holland, it was easy to create a party atmosphere.

Chelsea midfielder N’Golo Kante and Manchester United’s Paul Pogba were amongst those celebrating.

Pogba looked to enjoy every minute of it – and why shouldn’t he? To win the World Cup is a magnificent achievement, though his drive now should be to replicate something like that in a United shirt.