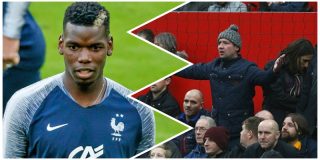 It may well have been intended as an innocent comment, but we’re not buying that. Everything Paul Pogba shares on social media is shared within reason.

Moreover, Pogba is well aware of tensions between him and Manchester United manager Jose Mourinho. He also knows that fans are noticing a difference in his performances for club and country – with the latter paying his hefty wages and waiting for him to show the slightest bit of consistency. We’ve been waiting a long time.

Pogba is currently on international duty with France and took part in their homecoming celebrations in Paris after the 2-1 win over the Netherlands on Sunday night.

As seen in the tweet below, the midfielder suggested that he was already looking forward to the next international break, which hasn’t gone down well with United fans below, who would appreciate more enthusiasm about returning to Manchester.

There is nothing wrong with being excited about representing your country. That is not the issue here, but his willingness to rub it in that he prefers wearing a France jersey over a United one should be deemed offensive.

As noted by The Guardian last month, the 25-year-old raised question marks over his future at Old Trafford by suggesting that he wasn’t entirely happy.

Then over the weekend, he responded to questions over his future and links with Barcelona, as per The Metro, but now with a lack of public recognition at least over his desire to get back to work for the Reds and continue to push them in the right direction, it has left many fans frustrated.

How I wish you never wear the Manchester United jersey again. Bringing you back is Mourinho’s biggest mistake in his United career.

Please leave united. You don’t deserve wear the badge. You care more for style that playing your heart out.

Have a chat with Luke Shaw Paul, he might be able to show you how to prove your worth 👍🏻

Don’t even think about United .. we don’t need you

Constant cryptic messages. Tweeting this like going back to the club that pays you incredibly well and fans that adore you as their hero is a chore. All because you don’t like your boss. Live in the real world Paul and show some respect/professionalism to this great club @ManUtd

Look forward to playing for your club Paul

There you have it. The fans are losing patience with you now, Paul.