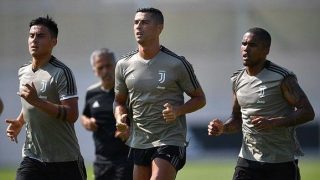 The 24-year-old has established himself as a key figure for Juventus since joining them from Palermo in 2015. He’s bagged 68 goals in 142 games, taking his career total to 106 goals, while winning three Serie A titles and three Coppa Italia trophies in the process.

In turn, why would the Turin giants sell the Argentine? There are claims that coach Massimiliano Allegri is having teething problems trying to find the right balance and partnership following the arrival of Cristiano Ronaldo in the summer.

Dybala was dropped for the game against Lazio and played just 10 minutes against Parma, which has led to speculation about an exit.

As reported by The Sun, via reports in Italy from Calcaiomercato, it’s claimed that Manchester United will attempt to sign Dybala in January by launching a bid of around £107 million to convince the Serie A champions to sell.

Whether or not that’s enough to reach an agreement remains to be seen, but United should really try their hand at signing Dybala, who despite being overlooked time and time again in the Argentina squad, would make a huge difference to our attack.

Juventus may even use Dybala as bait to get Pogba back in Turin. That would a deal that could certainly work.