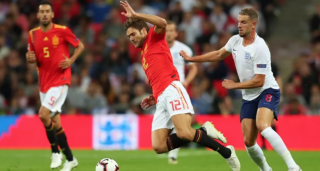 England took on Spain in their first game since the World Cup in Russia.

The Three Lions reached the semi-final of the World Cup for the first time since 1990.

Spain, their opponents on Saturday night, were knocked out in the round of 16 by Russia.

Just 11 minutes into the game at Wembley, Manchester United forward Marcus Rashford opened the scoring for England thanks to an exquisite through ball from club and country team-mate Luke Shaw.

However, Spain would bounce back and win 2-1 with goals from Saul and Rodrigo.

Despite losing the game, Liverpool midfielder Jordan Henderson had some positive things to say about Rashford.

“We all know how talented Marcus is.

“His was a great finish. He had another one or two chances that maybe he would have liked to have scored but I thought he looked sharp.

“He was lively and he’s always a threat on the counter-attack. He’s a fantastic young player so he just needs to keep learning, keep improving. He’s a big part of our team.”

Shame (not really) the same could never be said about Henderson, arguably one of England’s most overrated players for doing very little on the pitch. He’s not the type of player I’d be looking to when things aren’t going the team’s way.

Though he might pretend to be a hardman – something he’s built the courage for since taking the Liverpool armband from Steven Gerrard. So awkward, he looks a parody of himself.

Rashford, on the other hand, has a lot of work to do at club level. His goal against Spain was different gravy but he’s not getting ahead of Romelu Lukaku until he does that on a consistent basis.

That said, Jose Mourinho liked what he saw from his two players linking up to hurt Spain early on in the game.