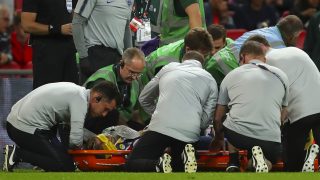 Luke Shaw is set to return to Manchester on Monday after suffering an injury blow during England’s defeat to Spain on Saturday.

The 23-year-old sustained a nasty head injury following a collision with Real Madrid defender Dani Carvajal which then resulted in a horrible landing on the pitch.

Shaw required a stretcher and oxygen mask when leaving the field of play and was immediately brought to the hospital before Carvajal could get into the dressing room to wish the Manchester United ace well.

According to the Daily Mail, Shaw will return to United’s medical staff on Monday where he will undergo further tests before being given the go-ahead to play again.

United take on Watford at the weekend and time will tell if Mourinho thinks Shaw is ready to feature. If not, it is expected that Ashley Young will be handed an opportunity to win back his place at left-back. This sort of competition is good for both players, though. Keeping them on their toes and not allowing complacency to take hold.

Still, it would be a shame to see Shaw’s momentum broken after a strong start to the new season. When he’s fully fit and at the top of his game there are few better left-backs in the English game.