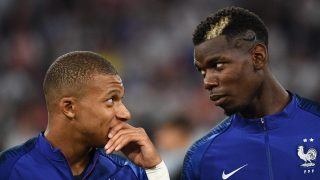 Paul Pogba attracts interest like no other footballer when it comes to column inches. The France star has not been able to keep himself out of the headlines this year, both for positive and negative reasons.

Winning the World Cup is a big deal – make no mistake about it – but we get the impression Pogba feels he’s reached the pinnacle of football after doing so, whereas his club record leaves a lot to be desired since joining Manchester United in 2016.

United fans, by and large, still like Pogba and hope he can become more consistent with his performances and start producing match-winning displays on a more regular basis. The problem, however, is that he looks unhappy playing under Jose Mourinho and isn’t afraid to flirt with a move to La Liga champions Barcelona.

Barring the glimpses of brilliance he shows from time to time, the Frenchman has flattered to deceive following his £89 million move back to Old Trafford.

But there are United fans losing patience with Pogba after his eyebrow-raising comments to the media about his future and because of his inconsistent performances. You can’t blame them either.

Against the Netherlands on Sunday night, Pogba bossed the match which would have left any United fan wondering why he can’t do it for us?

Perhaps it has something to do with playing alongside a player like Chelsea’s N’Golo Kante, who would make life easier for any partnered midfielder. France put in a dominating display and won 2-1 thanks to goals from Kylian Mbappe and Olivier Giroud.

See the highlights of their performance below.

Fans who watched the game took to Twitter to point out that Pogba looked a completely different player from the midfielder who has been below par at best in the Premier League over the past three seasons.

I usually give Pogba the death on here but hes really growing on me. When hes in a France shirt he looks like a completely different player. Wasted talent at club level though. The Jose effect.

Pogba looks a complete different person when playing for France!

How much of a different player does Pogba look when he plays for France.

Pogba is a completely different player when he plays for France 🤦🏼‍♂️

Pogba is a completely different player for France than he is for Man U. He can be brilliant if he wants to be. #FRANED