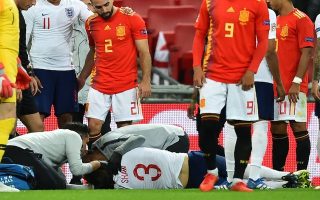 After their collision left Luke Shaw needing to be stretchered off with an oxygen mask after a heavy fall, Dani Carvajal was evidently affected by the incident like any decent human being.

The England international sustained the knack during England’s 2-1 defeat to Spain at Wembley on Saturday night, with the concern raised immediately more so due to the impact with the ground after the challenge.

While Carvajal looked concerned as the Manchester United left-back received treatment on the pitch, Marca claims that he went to try and visit Shaw after the game but he wasn’t in the changing room as he was taken to hospital for further tests.

The report goes on to suggest Carvajal asked David de Gea for his United team-mate’s phone number in order for him to be able to get in contact and to check on how Shaw was doing at the time.

This was a classy gesture from the Real Madrid star, but it wasn’t the last. Sergio Ramos took to Twitter after the match to wish Shaw the best with his recovery, prompting angered response from Liverpool fans after Mohamed Salah’s injury in the Champions League final a few months ago.

After making such a positive impact on the pitch for club and country these past weeks, it would be a shame to see Shaw out of the game for another considerable amount of time.