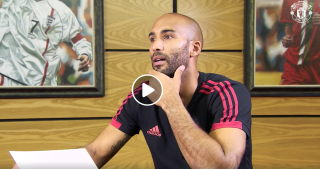 Grant signed from Stoke City this summer and has come in as third-choice goalkeeper, but has yet to make his competitive debut, which is likely to come in the League Cup this season.

The objective behind this concept is to see how well Grant knows his team-mates. Keep in mind he’s a new signing and hasn’t had that long with this bunch of players.

They basically put together a list of quotes and ask Grant to guess which of his team-mates said the following.

To be fair, he doesn’t do too bad…