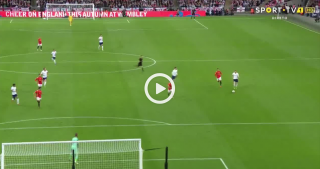 Luke Shaw built on an already impressive start to the season by making his mark on the UEFA Nations League by setting up England’s opening goal against Spain.

With Jose Mourinho looking on from the stands at Wembley, the ball arrived at Shaw’s foot just a short distance from the halfway line.

Exploiting the space that Luis Enrique’s side had vacated, Shaw ran at Dani Carvajal. Then the United left-back played a wonderful through ball in Marcus Rashford’s path.

Then Rashford slotted the ball past David de Gea for a uniquely United moment in a stellar encounter.

The lead didn’t last very long and Spain came back to win 2-1 thanks to goals from Saul Niguez and Rodrigo.

However, Shaw gave everyone a scare in the second half, but he has reassured all that he’s fine after a nasty head injury.

Following a collision with Carvajal, Shaw hit the ground hard to spark concern.

He required a stretcher and an oxygen mask, but it appears as though it isn’t as concerning as it initially seemed.

“Luke is awake and alert, having been assessed by our doctor and given an X-ray. He’ll stay with us overnight for further observation, with another update to come in the morning,” a statement from England confirmed, as per Sky Sports.

Further, the 23-year-old also tweeted the below to offer an update on his condition, and so it doesn’t sound as though he expects to be out for too long which will be major relief for him and United given his strong start to the new campaign.

The Reds return to action when they take on Watford next Saturday evening.