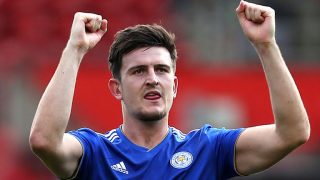 Leicester City have confirmed that Harry Maguire has agreed a new deal with The Foxes.

That’s a massive boost for Claude Puel and his team, who will count themselves lucky after fighting off interest from Manchester United in the summer.

The 25-year-old has signed a new five-year contract to remain at the King Power Stadium. That deal will keep the England international at the club until 2023.

Maguire has given the following quotes to Leicester’s official website.

“Ever since I came to this Club, I’ve always reiterated how good they’ve been to me.

“They gave me an opportunity to play in the Premier League and built a great platform for me to go and perform at the World Cup, so I thank them a lot. I owe them a lot and I’m looking forward to the future.”

This should be enough to end speculation linking Maguire to United, for now at least.