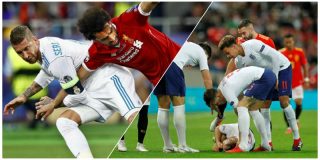 Manchester United fans feared the worst when they saw Luke Shaw stretchered off with an oxygen mask when England hosted Spain at Wembley on Saturday night. The left-back suffered an awful-looking injury after colliding with Dani Carvajal early in the second half before his head bounced back off the ground with a worrying thud.

Shaw was subsequently down for over five minutes before medical staff removed him from the pitch.

Fortunately, though, early reports suggested Shaw wasn’t badly hurt. It has been revealed the 23-year-old was awake and on his phone before the full-time whistle.

The FA later announced that Shaw would be staying with their medical staff overnight after being assessed by doctors and given an X-ray.

Shaw then sent a tweet to his fans: “Thank you for all the love and support I am doing fine and am in the best hands. I’m a fighter so I will be back soon!”

This came as a relief not only to us but Spain captain Sergio Ramos. He replied to Shaw’s tweet by saying: “Get well soon, @LukeShaw23!” – and that sparked plenty of reaction from United fans.

How considerate of Ramos, who was booed by England fans throughout the game, potentially because of his heroics in the Champions League final against Liverpool, back in May.

Interestingly, Ramos wasn’t as quick to wish Mohamed Salah well after being substituted in the final after picking up an injury, which is the reason Liverpool fans now tend to dislike the Real Madrid star.

A public enemy for Liverpool fans. In ways, a hero to us.

What a lovely, caring man. https://t.co/zIYbgGfLTn

Class. Every United fan loves you.

So classy mate. Fair play and good luck for the season legend!

King. You should’ve been applauded this evening. pic.twitter.com/tqo8VJq79Q

Ramos you legend #mufc fans have respect for you

All Ramos needs to do now is sign for United…