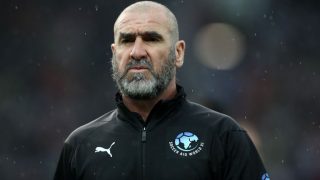 The King has shared his belief that Jose Mourinho is simply not the right man for Manchester United.

Eric Cantona enjoyed a glittering spell at Old Trafford during his playing days, scoring 82 goals in 185 games for the club while winning four Premier League titles and two FA Cups as he played a key role iin one of our most successful periods.

However, Cantona has never been shy in sharing his opinions on maters at his former club as noted in his comments below.

Speaking on Mourinho, Cantona has ultimately delivered a fair personal assessment on the boss by insisting that while he is a great coach, he doesn’t believe that he’s the right fit for United given the contrasting views and expectations of the way the team should play.

He goes one step further by suggesting United made a mistake by not going for Pep Guardiola and that he even fancies himself to do a job at the club if he were to get a call from them.

“Manchester United is a great club and will always be great. They will win things, I know they will,” he told the Daily Mail.

“But the way they play? Not good. The manager has them playing the wrong way for the fans. No fun, no creativity. I like Mourinho. He has a good personality but not for United — they should have [Pep] Guardiola as coach. He should be there, but he is doing magic with that other club. The club I cannot name.

“I would like to coach. If they called me, I would go; I would enjoy it. They know where I am. Then we would play creative football once again.”

With no managerial experience at this level, it’s highly unlikely we’ll see Cantona appointed as United boss any time soon.

Mourinho is not likely to appreciate the comments on Guardiola, although he has a point given how Manchester City have performed under the former Barcelona manager.