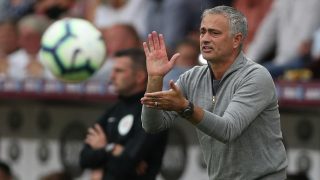 In the beginning, the enemies are other teams.

So far per usual.

Then a club legend who speak his mind.

Then the hierarchy you once claimed were your allies and on same page.

The Chairman that gave you an extension when results were not that good.

The board that gave you 401 million quid to spend.

Then players purchased by other managers.

Then the squad – maybe not an enemy but simply weak – makes it hard.

Then a player you once made a world record signing and hardly ever dropped.

Then all French players or all younger generation or whatever.

Then fans that think that the style of football used to be better.

Then people who don’t care what was achieved at Chelsea.

Then anyone who suggests that 13 championships were won because things were different. That there was actually a United Way. Finally, anyone suggesting the results aren’t great and the football isn’t breathtaking.

Jose Mourinho proving he's a nice guy after all… pic.twitter.com/0tEp5ZsMzT