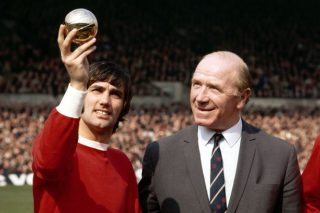 With McNarry’s permission, we take snippets of her Facebook feed and bring it to a broader audience.

The latest segment is part one from a Happy Memories series, which she opens up about a night in August 1988, when Best was honoured on home soil with his testimonial match at Windsor Park.

A dinner was held at the Europa Hotel in Belfast – known as the “most bombed hotel in the world” after having suffered 36 bomb attacks during the Troubles in Northern Ireland.

McNarry recalls standing alongside Sir Matt Busby watching footage of Best on a screen. Despite having managed the Belfast boy, Busby still looked on in disbelief. It was then she finally realised, at 36-years-old, what a genius her brother actually was on the pitch.

“I was so proud of George that night. He had been sober for a long time (well over a year) and he was looking amazingly fit and healthy.”

A big thank you to Barbara for sharing this wonderful snippet.