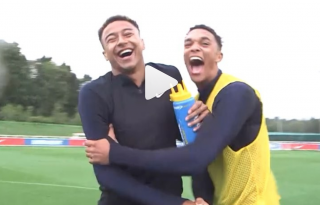 Gareth Southgate was praised for the atmosphere he created within the England camp in the summer. The players looked relaxed at the World Cup and had time for fun with one another whilst reaching the semi-finals.

Now, we have more evidence of that with a quality video emerging online.

Jesse Lingard is currently away on England international duty, along with Manchester United team-mates Luke Shaw and Marcus Rashford.

However, it seems one of his best mates in the squad is actually Liverpool’s Trent Alexander-Arnold.

A clip of the pair having a laugh about the result of some game has gone viral, because of how Alexander-Arnold settles the debate.

Lingard tells the Liverpool defender ‘if you hit the bar I’ll shake your hand,’ and from over 30-yards, he pings it.

At first, I questioned whether it might be a doctored video, but this actually happened.

Lingard will make sure he doesn’t pull the wool over his eyes when United take on Liverpool this season. He’ll just set Rashford on him since that worked last term.

That’s one way to settle an argument! Wait for it… 😎😅