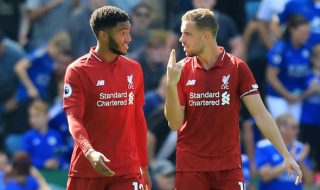 Micky Quinn has suggested Liverpool’s Jordan Henderson would start ahead of all but one of Manchester United’s current central midfielders.

The talkSPORT pundit said that only Nemanja Matic would keep Henderson out of Jose Mourinho’s midfielder after suggesting the Reds’ midfielder has looked out of sorts so far this season.

Henderson is often singled out for criticism mainly as a result of the role he plays at Liverpool, but even at that, I don’t think he’s very good. I would much rather some of the players we already have available to us…

“Yeah I definitely think he’d get in the United (team),” Quinn said on talkSPORT.

“They’ve been struggling. (In place of) Fred. I mean what’s he done? He got bombed at the weekend (against Burnley), he hasn’t settled in.

“I think he’s better than Herrera.

Quinn, who unsurprisingly grew up on Merseyside, often declares his fondness and support of Liverpool, but the feeling that Henderson is a crucial part of Liverpool’s progress of late is not mutually held amongst their supporters.

The Liverpool captain is not better than Ander Herrera – and Quinn only names three of our midfielders rather than comparing the lot and, it’s easy to have a pop at United these days.

Moreover, it’s way too early for comparisons with Fred. He’s only played a month’s worth of competitive football in England and this bloke is comparing him to an England international?

Let them have their moment in the sunshine. We’ll be back.