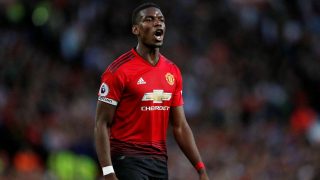 I was as excited and intrigued as the next fan when Paul Pogba made his return to Manchester United.

Jose Mourinho said he could be ‘the heart of the club.’

And honestly, I was willing to give him time to settle back in and give us his very best. Yes. It’s been magic at times. But on the whole, his performance and perhaps attitude hasn’t been consistently 100%.

Now, the rumour mill is swirling again with quotes he is alleged to have said. There have been whispers of disagreements with the manager. Having my fair share of experience reading many stories regarding the club, of course, I accept and acknowledge that words can be taken out of context, exaggerated or even spun into outright lies.

But if what we have heard is to be believed, is it really worth the hassle and knock on effect to the team?

He said this. He didn’t say that. Truthfully, at this point, I don’t care anymore. There has been enough upheaval, change of managers and scrutiny at Manchester United without one player supposedly trying to interfere with it all himself.

Whilst Jose still has my support, I understand that some fans will disagree and have their own opinions to support individual arguments. But taking the manager out of the equation for a moment, do any of us really want any said player believing he is bigger than the club itself?

Apparently, if Paul said what he really wanted to say, he would get fined. Well, I’m pretty sure if he was genuinely happy and wanted to say how settled he was back in Manchester and how determined he is to succeed, there would be no chance of that.

So, it isn’t even so much what he has said. But what he hasn’t said. At our worst, Manchester United is still arguably one of the biggest clubs in the footballing world. Not that I believe we are at that point now. At our best, we are unforgettable.

Regardless of who you are, how much money you earn or how many fans you have, if you can’t appreciate the magnitude of that then maybe it’s not for you after all.

Without giving him any more acknowledgement than he deserves, Pogba’s agent Mino Raiola is not helping matters in the slightest. He believes Paul Scholes ‘wouldn’t recognise a leader if he was in front of Winston Churchill’. Bless him. First of all, don’t mention one of this country’s all-time greats. And while you’re at it, keep Churchill out of your mouth too!

With all due respect Paul, if United means as much as you said it did when you made your much talked about return, use your own mouth and more importantly actions on the pitch to set us all (including that agent of yours) straight.

As a Red, you will always have my support. The question is though are you truly here? Or is your heart and mind elsewhere.

If the latter is true, as I’ve said a thousand times before and probably will again, you might be missed by some but there will never be any player big enough to mean more to me than my beloved club.

Only this time, don’t come back!

If you’re as bored by all the nonsense and hearsay as we are, then stand your ground and fight. You will have my utmost respect for doing so.

Either way, we’ll continue to be the topic on everyone’s lips and make waves be it through winning or losing.

For once, it would be just wonderful if the focus could be on the football itself.
Players and managers will come and go. But we’re here for United.