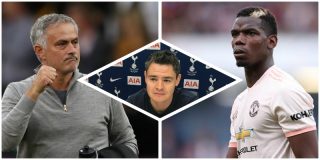 Manchester United’s “unsellable” stance over Paul Pogba has loosened, according to The Independent.

On Thursday evening, the French midfielder cast more doubt over his future at the club by admitting “who knows what will happen in the next few months.”

However, it is understood that the Reds now no longer deem Pogba’s sale as unthinkable.

Two full seasons have passed since Pogba’s return to Old Trafford and he has yet to justify the then world record transfer fee of £89 million.

“It’s just that, for the last two years for club and country, Pogba has looked little more than just another cog; almost a readily replaceable player. He wasn’t bought for a world-record fee to be a cog.”

The fact everyone can see Pogba’s talent makes the entire situation more frustrating. We thought back in 2016 that we were signing one of the best midfielders in world football, but how wrong were we?

A slap of reality wouldn’t go astray if Pogba believes he’s already one of the best. In fact, that goes for anyone still of that belief. He may have won the World Cup in July, but here’s nowhere near consistent as others in the same position, therefore, United ought to start scouting alternatives.

Delaney adds: “He was bought for that money to be irreplaceable, and the fact that still isn’t the case means any desire to leave won’t bother United in the way it might have.

“There are some figures around the club who believe the “unsellable” stance on such a commercial valuable is already loosening.”