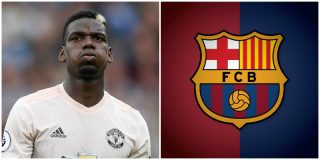 Luis Suarez has said Paul Pogba would be welcome at Barcelona as the Manchester United midfielder continues to be linked with a move away from Old Trafford.

Suarez joins team-mate Gerard Pique to state that the Frenchman would be greeted with open arms at Camp Nou.

Pogba’s relationship with manager Jose Mourinho is something of an issue at the moment, with the player sounding unwilling to better the situation. He now appears open to a move away from United again after struggling to make the impact many expected.

As such, Suarez feels that a move to the La Liga champions would be a good fit for the 25-year-old World Cup winner.

“Pogba is an elite player – he has won everything,” the Uruguayan told RAC1 .

“He has a lot of quality and he is a key player for United.

“I think he would like to be competing for more [silverware] than he is at the moment. He may not be a Barca player yet, but he would always be welcome.”

Moreover, Neil Custis of The Sun is of the view Pogba is making matters even worse for himself by testing our patience and I couldn’t agree more.

Pogba is really starting to test @ManUtd supporters’ patience now. Did he not hear the support for the manager at Burnley?