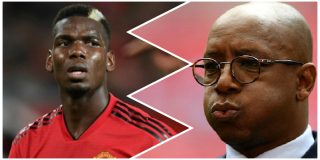 Former Arsenal forward Ian Wright has claimed that Paul Pogba “still has a lot to prove” as speculation surrounding the future of the Manchester United midfielder continues to unravel.

Barcelona continue to be heavily linked with a move for Pogba, with Luis Suarez and Gerard Pique giving interviews about the Frenchman being welcome to Camp Nou.

Whilst away on France international duty, the 25-year-old admitted that he does not know what the future will hold despite still being under contract at United.

This comes after reports of a worsening rift between Jose Mourinho and Pogba which has led to the belief that one of the two won’t be at Old Trafford next season.

Wright has branded Pogba “a great player”, but has insisted that the 2018 World Cup winner has not yet proved that he can perform on a consistent basis in the Premier League.

Usually, former rival players making such statements would prompt an angry response from United fans, but they’re losing patience with the player and his underwhelming performances.

“He’s a great player, and he’s a World Cup winner. He has come back and has proven that he is that guy. But if Paul Pogba left in January, and we looked back at his Premier League CV, would you say he has been brilliant here? He still has a lot to prove!” Wright told Sky Sports.

“I think he’s fantastic, that picture of him dabbing with the World Cup is brilliant, it’s going to be iconic, but at the same time, in the Premier League he hasn’t done it properly, consistently enough yet.

“Coming back with a World Cup medal has given him a false sense of security, in thinking that: ‘I’m bigger than this now.’ We need to see more from him and what he’s capable of doing.”

Pogba played in France’s 0-0 draw with Germany in the UEFA Nations League on Thursday night. He has scored two goals for United so far this season.