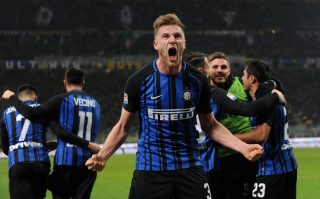 Milan Skriniar has reportedly rejected a new contract from Inter Milan amid links to Manchester United and Barcelona.

According to La Gazzetta dello Sport (h/t Bleacher Report), following an impressive debut season at the San Siro the Milan giants were keen to reward the centre-back with new terms, increasing his annual salary to €2.5 million.

However, it’s reported the initial proposal has been pushed back by the player and his agent Karol Csonto, they want an annual wage of €3 million. The sort of money he would get in the Premier League.

The report states that both parties are still far from an agreement on a contract extension and that negotiations have been put on hold as the player’s current contract expires in 2022.

That suggests Inter might want to put a bigger release clause on his contract – if there is one already – and want to know exactly where they stand with the aggressive centre-half.

United were heavily linked with Skriniar in the summer, with several sources claiming he was one of Mourinho’s prime targets at the beginning of the transfer window. Then, club executive vice-chairman Ed Woodward failed to deliver an alternative causing some upheaval with the manager and his entourage.

Side note: In June, Skriniar revealed that he was flattered by United’s interest but said he remains happy in Milan. This all came from a report suggesting he was subject of a £57 million bid, as per The Express, before Inter rejected the approach.