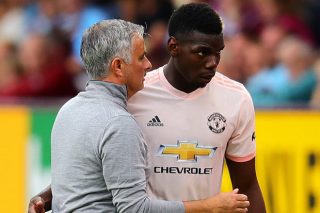 Manchester United midfielder Paul Pogba has dropped a somewhat worrying transfer hint amid speculation linking with a move to Barcelona.

The France international has endured a difficult start to the season at Old Trafford, following a summer that saw him win the World Cup in Russia.

It seems increasingly clear that Pogba doesn’t look an ideal fit for United manager Jose Mourinho and speculation surrounding his future has been circulating for some time.

READ MORE: Season Stats So Far: First goal crucial to Man Utd and Luke Shaw determined to get his career back on track

Most recently, Don Balon linked the 25-year-old as a top target for Barcelona, who could be willing to sell Ivan Rakitic to make room for the former Juventus star.

Meanwhile, the Daily Mirror report that Pogba and Mourinho have reached an agreement of sorts, with the France ace happy to wait for a move, despite being expected to push for one again next summer.

In an exclusive interview with Sky Sports, Pogba talks about his future at United and his relationship with Mourinho. (H/t Caught Offside for translating)

‘There was a lot of talk, but it was just like that, I’m under contract in Manchester.

‘My future is currently in Manchester, I still have a contract, I’m playing there at the moment, but who knows what will happen in the next few months.

‘We (me and Mourinho) have a pure coach-player relationship, that’s right.’