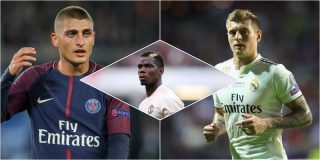 Once upon a time, Paul Pogba was the most expensive footballer in the world. Back when Manchester United fans were buzzing about signing a player with the ability to become one of the very best.

Fast forward to his third season at Old Trafford — since returning from Serie A giants Juventus — and it’s fair to say he has not only faded away despite winning the World Cup in July, Pogba has also put his future at United in real doubt.

The Frenchman’s relationship with manager Jose Mourinho could be a lot better. Say otherwise and people will see you as being in utter denial.

Being a betting man (one that loses more than he wins), I wouldn’t fancy Pogba’s chances of being at United next season, so here are five alternative options for Mourinho to consider if the club needs to find a replacement.

Constantly linked with United in the summer, Milinkovic-Savic remains at Lazio despite interest from some of Europe’s biggest clubs.

Pogba is the player he is most often compared to, which makes a potential move to United worthwhile as long as the Frenchman leaves. The difference here is SMS showed he can win games single-handedly for Lazio — something we haven’t seen enough of from Pogba, part from Manchester City away last season.

He is one of the best up-and-coming talents in Europe and I’m a firm believer that the world’s best young footballers belong at Old Trafford.

Marcos Verratti has been regarded as one of the best midfielders in Europe for years, yet at 25, the Italian has still to reach his peak. And if he fancies leaving his comfort zone, why doesn’t he leave Ligue 1 for a new challenge?

He was close to a move to Barcelona in the past but the transfer failed to materialise. Veratti is a technically gifted midfielder, known for his quick feet which allow him to manoeuvre out of tight spaces, similar to United’s new signing Fred.

But it’s Verratti’s vision that stands out. This is one of the best playmaking central midfielders in world football and he’d be a very welcome addition at Old Trafford, even if it meant losing Pogba.

Better Call Saul! Netflix references aside, this lad has been a mainstay in Diego Simeone’s Atletico Madrid side in recent years. He would be a more versatile option than most in this list, with the ability to play a number of different midfield roles.

Perhaps his key attribute is to find and exploit spaces behind the opponent’s defence. Whether we lose Pogba or not, Saul is definitely a player I’d target. Can we throw Real Madrid’s Isco in too? Go on!

The Brazilian holding midfielder brought balance and stability to Zinedine Zidane’s Real Madrid side. Although Casemiro is a totally different midfielder player to Pogba, I can only imagine Mourinho loving the chance to work with this player.

Casemiro is one of the best out there when it comes to breaking up play in the centre of the park and distributing the ball efficiently. He’s not flash like Pogba, but he takes instruction and does his job.

As far as central midfielders go, you’d be hard-pushed to find a more eye-catching figure in world football at the moment. The Germany international brings poise and control to the team, helping his side to retain possession and, when there’s a gap to be exploited, slicing open an opponent’s defensive structure with an accurate pass.

He also has a knack for scoring or setting up goals in crucial matches and it’s no secret that Mourinho identified him as a target in the summer, as per The Independent, even if luring one of Madrid’s most important players seems far-fetched.