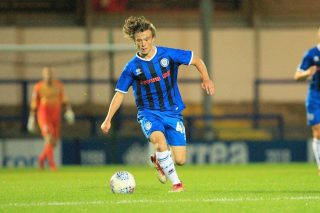 Manchester United are said to be interested in Rochdale’s rising star Luke Matheson, according to the Daily Mail.

The 15-year-old became the youngest debutant for the side as he came on as a substitute against Bury. They also claim he was the Man of the Match in the Checkatrade Trophy win over their rivals and a number of other clubs are believed to be keeping tabs on the young talent.

That list includes likes of Liverpool, Chelsea and Everton, who are all tracking the right-back.

Manager of Rochdale, Keith Hill, wasn’t surprised by his performance but played down rushing Matheson into regular first-team games.

Hill said: “That first-half was a little insight into what we see on the training pitch.

“We know what he can do. It’s not a leap of faith because we know he can do it, but is he cut out for the pressure of real men’s football?”

Fair assessment from the Rochdale gaffer and refreshing to see him give such a young kid game time in the first-team. As long as he’s not burnt out prematurely, this experience could be key to Matheson’s future in the game.

Hill added that Matheson has been training with the senior side for some time, which means he’s had to juggle football and school life.

He has a long way to go but being linked with clubs like United this early should give the kid a big boost.

We look forward to hearing more about Matheson and, whatever happens, wish him all the best with his career.