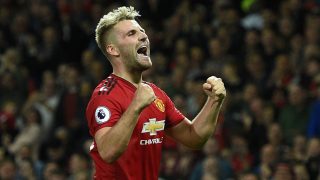 The first international break is upon us, and therefore the perfect chance to look back over the opening four weeks of the Premier League and draw some premature conclusions — or at the very least, an interesting stat or two.

When it comes to our most improved player, look no further than Manchester United’s Player of the Month for September, Luke Shaw.

The England international has made the most sprints for United this season and has covered 39.4km in distance on the pitch, second only to Paul Pogba.

While the naked eye can tell you more than a bunch of numbers, stats can be helpful to gather more insight. Anyone who has watched Shaw this season will tell you he looks more focused and ready to silence his critics.

Of course, Jose Mourinho was a critic; so critical that it is he who has had the greatest impact on Shaw. The manager has thrown the left-back a number of lifelines when it was reported he would be sold to the highest bidder, and the player is currently returning the favour.

Overall as a team, the Reds have had an underwhelming start to the new season, winning just two of the opening four games.

At least we’ve continued the amazing record of winning each of our last 23 Premier League matches in which we’ve scored the opening goal.

23 – Manchester United have won each of their last 23 Premier League matches in which they’ve scored the opening goal. Stronghold. pic.twitter.com/aPKe4DWhiE

That probably would have been the case again had Romelu Lukaku converted his open goal opportunity against Tottenham, before Mauricio Pochettino’s men went on to win 3-0 at Old Trafford.

When you consider how we set up in the first half versus Spurs — more offensive than usual — the tone of the game would have likely changed if we had scored first. The chances were there, but United were nowhere near clinical enough to take advantage.

If Lukaku scores, then I reckon Mourinho reverts back to his conservative approach. There’s an obvious risk in that Spurs may sniff out an equaliser but, as the stat above suggests, the Portuguese tactician has this side well-drilled and, more often than not, we’re an extremely difficult unit to break down with numbers behind the ball.

Hence why I dislike calling Mourinho a defensive manager, who parks the bus like many memes on social media suggest. He likes to control the opposition.