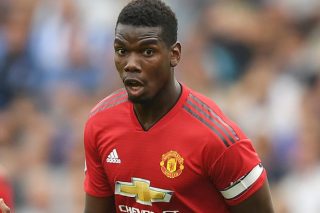 Paul Pogba is the subject of Twitter rage this afternoon after he appeared to once again drop a hint that he wants to leave Manchester United in the near future.

The France star has not been able to replicate his form from the summer for his club and there are tensions between him and manager Jose Mourinho, which certainly isn’t helping matters.

Since he signed for United in 2016, Pogba has failed to justify his big price tag and he’s not looked an ideal fit in Jose Mourinho’s midfield, akin to forcing jigsaw pieces together.

While some fans have blamed Mourinho for Pogba failing to blossom in a Red shirt, it seems the tide may be turning after the manager made attempts to fix their relationship at the start of this season by handing him the captain’s armband for the first two league fixtures against Leicester City and Brighton.

Speaking to Sky Germany, Pogba has provoked anger by failing to rule out a future transfer away from Old Trafford.

‘My future is currently in Manchester, I still have a contract, I’m playing there at the moment, but who knows what will happen in the next few months,’ he said.

It’s hardly a surprise to see that line spring a negative reaction from United supporters.

No man, manager or player is bigger than Manchester United Football Club.

Awful words from Pogba now the window has closed. All sides need to stop the talk, the briefings and get on with what they are paid to do which is sort Manchester United out and get better results. Stop talking about 'who knows what will happen' bollocks, it won't wash with fans.

Get out of my club Pogba.Plz leave united alone

Pogba turns up once in 5 games. Get out of my club.

Pogba: “My future is currently at Manchester [United]. I still have a contract. I’m playing there at the moment, but who knows what will happen in the next few months.”

I’m getting tired of this honestly. If he wants to leave, get him out. #mufc