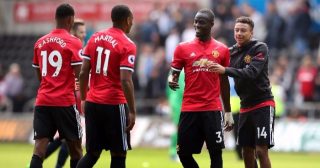 Manchester United have reportedly offered Anthony Martial a new contract with Juventus and Bayern Munich both said to be primed to swoop for the French forward.

The 22-year-old has struggled to establish himself as a key figure in Jose Mourinho’s plans at Old Trafford, as he’s failed to solidify his place in the starting line-up due to stiff competition for places, with both Alexis Sanchez and Marcus Rashford also fighting for left flank role.

With his current contract set to expire next summer, the Frenchman is edging closer to becoming a free agent, but it has been suggested by Calciomercato that he could be set to sign a new deal with United offering a contract worth up to €10 million a year.

It remains to be seen whether Martial will agree to stay at United after his agent made it clear in the summer that his wish was to leave United. Many believed that was down to falling out with manager Jose Mourinho.

With Cristiano Ronaldo, Paulo Dybala, Douglas Costa, Federico Bernardeschi and Mario Mandzukic all fighting for places at Juve, the former AS Monaco forward should think twice about moving for Turin for regular game time.

That could be more realistic at Bayern, but time will tell if he decides to stick it out at United and prove his worth under Mourinho or wants a new challenge without completing the last one!