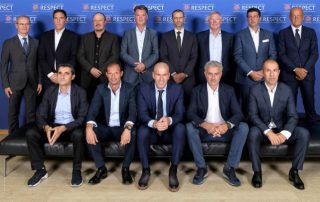 Europe’s top coaches are reportedly requesting an end to the away goal rule in the Champions League and Europa League.

Among the coaches present at the Uefa meeting are Manchester United’s Jose Mourinho and Arsenal’s Unai Emery, along with other big names.

According to BBC Sport, coaches have come together to call on Uefa to scrap the away goal rule as it’s been agreed that it no longer feels relevant in the modern game.

This is down to managers agreeing that it is nowadays easier to score away from home than in the past, as per BBC Sport.

A logical move and an end to a rule that perhaps made more sense in a time where clashes between the big clubs were closer affairs.

There is a lot of emphasis on attacking play nowadays, with Real Madrid winning the last three Champions League titles outright, so there is less need to provide an incentive for clubs to show ambition in away ties — unless you’re United against Sevilla…

The rule was brought in originally to avoid extra-time and penalties.