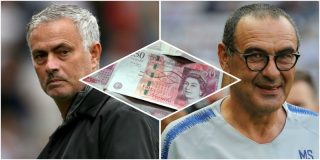 Manchester United and Chelsea are reportedly both in the hunt for Brazilian superstar Neymar, who apparently wants to seal a move away from Paris Saint-Germain.

According to Don Balon, both the Reds and the Blues are interested in the former Barcelona forward and that they aren’t the only clubs in the hunt for his signature, as Real Madrid are also keen on landing the player.

The report also notes that Neymar doesn’t want to play in France any longer beyond this season, so that could mean PSG will have more of a go at winning the Champions League than before. That is, after all, the reason they spent so much to bring him to Paris.

Neymar is one of the best footballers on the planet. He’s up there with Cristiano Ronaldo and Lionel Messi. Both Chelsea and United know they will face stiff competition from Madrid — but will either Premier League club entertain such a saga?

That’s what I question about this report. United have a lot going on at the moment and Neymar is unlikely the answer to our ongoing issues, although none of us would say no to him joining.

As per Transfermarkt, Neymar’s current market value is at an all-time high £162 million. United could do with spending that money elsewhere such as the defence…

Moreover, we’ve heard nothing about interest in Neymar, which isn’t to say Don Balon are wrong with their report… but it’s not exactly the type of story that would slip through the cracks.

Real Madrid saw Ronaldo leave the club for Juventus this summer and they’re going to see Neymar as his replacement. He can definitely help Los Blancos fill the void left by the Portugal international.