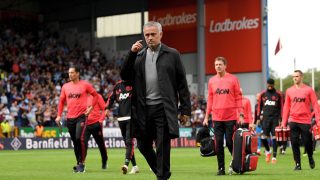 That’s more like it. The Reds finally resembled a side akin to a Manchester United team at Burnley as the players responded to recent questions and criticism in the best way possible. For all the talk of a squad not playing for their embattled manager – a manager reportedly one game from the sack after a shoddy start to the season – the result and, more importantly, the performance, flew in the face of those claims. Claims that again look to be wide of the mark as this was certainly not a team not playing for Jose Mourinho.

In our last game before the first international break of the season, United were strong, solid, professional, clinical and – most of all – a team fighting for the shirt, their manager and us fans. A team that did not look like one in disarray. The players have had many things levelled at them in recent weeks – namely their attitude and commitment to the cause – but in the face of adversity, United dug deep and showed class and character in equal measure. Mourinho described the performance as beautiful and it’s hard to disagree.

It was exactly what I, and I’m sure many others, want to see from our team. We are a club that sticks by our bosses – despite what some would have you believe – as Mourinho, just as he did against Spurs, showed a rare moment of connection with the Red Army when – having been backed vociferously throughout – he responded by hurdling a security barrier to applaud and warmly greet sections of United’s superb away support.

READ MORE: Ex-Man Utd scout reveals how he wanted to sign midfielder whilst at Liverpool

Unlike Jose ‘s previous third season syndrome scenarios at Real Madrid and Chelsea – which ended amid palpable discord – all our players and fans are standing behind the manager. Even if not for winning the title, we are good to go for a top 4 finish at least.

He’s not the lost the dressing room and he’s not lost us either. His message was clear: if we stick together and stay United, we can get through this as a club.

Let’s not kid ourselves here, we are still a club with deep-rooted problems and a win over a struggling and strangely subdued Burnley side should not disguise that fact.

Even in victory, discontent over the way the club is being run continued to rumble on as a group of United fans arranged for a plane to be flown over Turf Moor proclaiming CEO Ed Woodward as a master of ineptitude. Much has been said and written about the Glazers, Woodward and the mess they have put United into, but they are here for the long term and if the green and gold protest in 2005 didn’t drive them out, then nothing will. It is what it is, we have to accept it and our job as fans is to support the team, not the regime.

It would be churlish to merely think everything is fine and dandy again in the Old Trafford garden off the back of one win, but the mood is considerably better now than it was last week after our best performance of the season so far. It’s amazing what a win can do for confidence and morale. Marouane Fellaini may be much maligned but here he was strong and did his job well having been restored to the side for his first start of the season with Fred dropped. Even United’s unstable defence – marshalled here by Chris Smalling and Victor Lindelof – was solid, Jesse Lingard and Luke Shaw impressed again, Jose got our tactics spot on and, most pleasing of all, there was a first clean sheet. David de Gea did well when called upon and Romelu Lukaku looked back to his best, every player performed well and heading into the two-week hiatus, things are looking quite a bit brighter – for now at least.