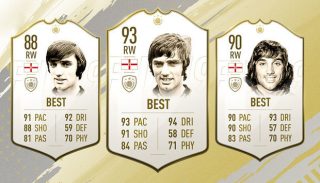 FIFA 19 will once again feature Icons. Here’s everything you need to know including which Manchester United Icons have been announced so far.

EA Sports FIFA 19 game is coming to PS4, Xbox One, Nintendo Switch and PC in just a matter of weeks, with the official release date scheduled for September 28th.

The FUT (FIFA Ultimate Team) Icons are some of the best players in the game and we’re expecting a varied selection of new, old and returning legends to make the cut for the latest game.

Firstly, we have Welsh wizard Ryan Giggs with three LM cards rated 87, 89 and 92.

The Wales manager will be joined by arguably the best player to play for United, George Best, with three RW cards rated 88, 90 and 93.

If that’s not enough to tickle your fancy, you will be able to partner Scholes in midfield with the legendary Roy Keane. He has three CM cards rated 86, 88 and 90.

Let us know in the comment section which Manchester United Icon you are most looking forward to playing with on FUT.