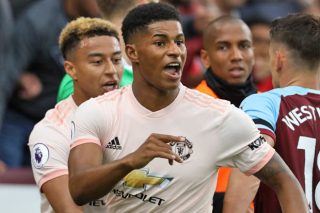 Rashford has failed to nail down a starting spot under Jose Mourinho at United.

When the England international has played, it has usually been out wide rather than as a striker.

Zlatan Ibrahimovic joined United in the summer of 2016 and immediately became United’s main striker during Mourinho’s first season in charge. Earlier that same year, under Louis van Gaal, Rashford broke into the United side as a striker and Wright says he wants to see the 20-year-old back in that position, which means he will probably have to leave his boyhood club.

“I think that Rashford, especially when he burst onto the scene, we saw flashes of a striker that can go into the space and he can link up, and he can finish,” Wright said on BBC Radio 5 Live.

“Now, what’s happened to him since he’s been at United on the left or the right, wherever they play him, he’s played everywhere apart from up front learning his trade.

“He’s got pace, he’s got skill, he’s got finishing ability. He’s been playing in roles that have taken the edge of those sides of his game.

“Rashford’s got massive, massive, decisions to make in the next year, 18 months for me.

Though I’m not sure Rashford can argue too much about a specific role in the team. He has every right to argue about the lack of game time, however, he now has to sit tight and soak up a three-match suspension after brushing heads with Burnley’s Phil Bardsley on Sunday.

Between Anthony Martial and himself, my advice would be to get their heads down and continue working to improve their games. If that means playing out wide, so be it. An improved game – with extra minutes on the pitch – should see both of them develop into all-around better footballers.

Despite Rashford’s tender age, he has already won 25 caps for England. That’s not too shabby for a young player, who doesn’t play for his club each week and when he does, it’s not in his preferred position.

Wright stopped short of saying England boss Gareth Southgate would want Rashford to leave United because he will be desperate for him to play more regularly.