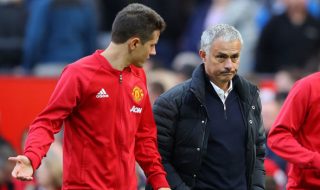 Now, under Jose Mourinho, the former Athletic Bilbao star finds himself in a complex situation.

According to the Metro, the 29-year-old has made it clear that he was to agree a new deal to stay at Old Trafford.

However, the issue is that the club have not offered him a new deal as of yet and that’s why he will listen to offers in January when the transfer window reopens.

Herrera’s current deal with the Reds will expire next year and if United do not sign an extension then he will have the option to sign a pre-contract agreement – in January – with any other club to leave Old Trafford for free next summer.

The Spaniard has fallen down the pecking order at United following recruits of midfielders such as Fred, Paul Pogba and Nemanja Matic since Mourinho was appointed the manager in 2016, though the Portuguese tactician tends to trust Herrera in the bigger games to man-mark individual players.

Do you think the £75,000-a-week midfielder should be given a new contract by United?