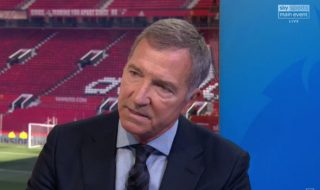 The Reds travelled to Turf Moor for their 4th Premier League outing of the season on Sunday evening.

Jose Mourinho’s men were no doubt desperate to get back to winning ways ahead of the international break, which the boss could argue has come at the wrong time, but at least the lads managed to bounce back from consecutive defeats at the hands of Brighton and Tottenham in our last two fixtures.

Burnley, meanwhile, were on a 2-game losing streak of their own going into the clash.

Romelu Lukaku’s brace cancelled out any opportunity for The Clarets to turn things around as the Reds picked up a comfortable 2-0 win.

In the aftermath of the clash, United’s performance came under the microscope from fans and pundits alike. One that loves having a dig at the Reds is former Liverpool midfielder Souness.

The likes of Lukaku and Alexis Sanchez impressed, but Pogba was again singled out for criticism.

Souness has been the French midfielder’s most high-profile detractor for some time now, with the Scot having brought Pogba’s name into the discussion out of the blue, even when he had a good performance against Burnley.

We win and all Souness can talk about is Pogba. Bellamy waiting for him to mention it and Souness fuming when he gets shut down at the end. Night made. 😂😂😂😂 #mufc

As such, fans have spread their views on Twitter labelling Souness as ‘obsessed’.

@Faisal_CFC_11 @Enayat_LFC every single matchday he talks about him. What the actual fuck! Tell me one pundit who is more obsessed with a single player than Souness is with Pogba. it’s ridiculous.

Souness is just obsessed with pogba. The mans got an unhealthy need to mention him any point he can. Fucking weirdo man 😂 get over it

I am far from a fan of Pogba myself but Graeme Souness is obsessed with the bloke. Constantly raging about him.

I see souness was having another rant about Pogba today. Bit weird, united weren’t even on tele. Obsessed. #BURMUN