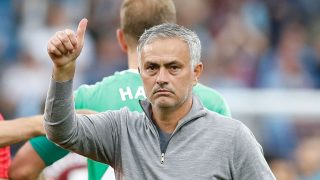 It was a good weekend for Manchester United which saw some of the pressure lifted from Jose Mourinho’s shoulders.

The Reds picked up maximum points in a 2-0 away win at Burnley.

Romelu Lukaku netted a brace at Turf Moor as United killed off a two-match losing streak.

After the match, Jose Mourinho made some prickly remarks to the British media – something he has never held back from doing in the past.

He accused the BBC directly, and then the wider British media at his pressure, of unfair reporting and not like him.

By contrast, Mourinho has spoken candidly to the Italian press after the Burnley game about why he’s secure at Old Trafford. The boss worked in Italy managing Inter Milan, so perhaps the Italian press showed more respect for him… who knows?

He spoke to reporters from La Repubblica and Gazzetta dello Sport after the win over Burnley.

Mourinho claimed that United won’t sack him because he’s too expensive (not that money is an issue at Old Trafford).

“They said I’m in danger, but I don’t think it.

“If they send me away, do you have any idea how much money they would have to give me?

The question on your mind – I can tell – is how much would United have to pay Mourinho if the board decided to sack him?

The truth is no-one really knows as such terms are highly confidential.

Yet The Times had a go…

“One of the reasons the Portuguese is so sure he will not be sacked is because the club would have to give him a substantial pay-off, thought to be in the region of £15 million, which amounts to one year’s salary in the manager’s present contract, which expires in 2020.”