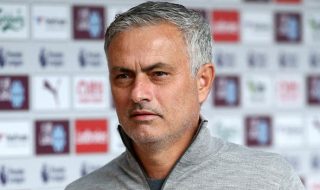 Manchester United secured a big win at Burnley on Sunday, but headlines were also created by the banner protest ran by a supporters group directed at Ed Woodward.

The Reds were under pressure after suffering back-to-back defeats to Brighton and Tottenham and would have been desperate to sign off before the international break with a morale-boosting win.

However, the timing of the international break may not please manager Jose Mourinho, who is hungry to see his players go on a run of wins in order to climb up the Premier League standings.

Thanks to a Romelu Lukaku brace at Turf Moor, United beat The Clarets 2-0 but there was a major talking point prior to kick-off as a banner which was paid for by a supporters group was flown above the ground with a message to executive vice-chairman Woodward, as seen in the tweet below.

Woodward was branded a ‘specialist in failure’, a term once used by Mourinho to describe former rival Arsene Wenger and so it seems as though the former Chelsea manager has the backing from a significant section of the fanbase.

From clapping the fans after the Spurs loss to being seen handing his jacket over to the supporter at Turf Moor, it seems as though Mourinho is still building a close bond with the United faithful. A clever way to get people on side.

That said, Mourinho has also seemingly backed Woodward by insisting that it’s a shared victory and the club’s chief also won on Sunday.

“You know, in the match I am not looking to the sky unless I am asking something for the guy to give me help. I didn’t see planes but Ed Woodward won this afternoon. He won 2-0,” he is quoted as saying by The Guardian.

Via TV monitor on desk pic.twitter.com/hFNde0PDND