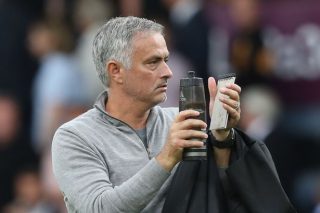 I thought I’d outgrown the illusion the world revolves around me but after the Burnley match, I might be falling off the wagon.

Overall, I’ve had a great summer. Work’s been alright. The World Cup was better. Best was the weather. While the rest of the northern hemisphere is gripped by a heatwave, it’s been rather mild in South Florida. Usually, it’s so humid that a sweat stain appears on your shirt in the time it takes to travel from the car to the air conditioning inside the 7-Eleven. I don’t drive, which makes it worse. Like I said, though, it’s been a beautiful two months. The only disappointments were Manchester United’s play and Jose Mourinho’s antics.

My Sunday mornings involve a trip to the cafe to pick up a drink and an apple fritter for the West Regional Library. The downtown branch near my flat is closed for the day. The West Regional offers a nice quiet room where I can stream the United game in peace and quiet, though, making it worth the trip.

The cafe provides a perfect view of the bus stop across the street. I sipped on my coffee as 9:30 approached, playing Freecell on the computer. The first bus west leaves the terminal on the half-hour. It needs at least five minutes to reach me but is typically late because the driver doesn’t want to arrive too early at the route’s far end in light traffic. I began packing up as the clock turned the half-hour, which is when my summer stopped being so pleasant.

I glanced up at 9:32 to find the bus pulling up to the stop. Cursing, I zipped up my shoulder bag, slung it over my shoulder, then held my wallet and the fritter in one hand while I dashed out the door, waving like a mad fool.

The driver recognised me and waited. Relieved, I joked he ought to let me know when he wasn’t going to be running late. I shouldn’t have been so cavalier, considering what was to come. As I fiddled with the wallet to pull out my pass, the fritter slipped from my grasp. The plastic container hit the floor. My treat rolled out.

I tried to snatch it up but it broke in half, both bits falling to the grimy surface again and becoming four or five. Disgusted, I kicked them outside, giving the pigeons a thrill, then settled down for the half-hour trip, hoping the episode wasn’t a bad omen.

When we arrived, a light rain was falling. The sky was darkening. Storms are frequent but short-lived in a Fort Lauderdale summer. Although I hadn’t been caught in more than a light sprinkle the whole season, I carried a pop-out umbrella in my bag.

While I pulled it out, the light rain became a deluge. I stood in the shelter patiently waiting for the pelting rain to subside. The match didn’t start until 11 am local time.

After five minutes or so, the rain returned to a tolerable level. I began the two-block walk to the library. Halfway there, the downpour returned with a vengeance. My shoes were soon soaked, likewise my trousers from the knees down. I struggled to keep the umbrella pointed into the gusting wind to stay as dry as possible while I quickened my pace. The wind whipped ’round constantly, however, drops pelting me from whichever side I wasn’t guarding. My sympathy for Eric Bailly grew tenfold in the moment.

I was thirty yards from the entrance when the wind turned the umbrella inside out. When I tried to pull it back, the tensile wire that keeps it in place snapped. I managed to keep the hamstrung device semi-functional until I reached the entrance but was soaked from the knees up, as well, by the time I arrived.

A librarian waited at the door, passing out plastic sheaths to keep the floors dry and people on their feet. I declined, tossing the umbrella in the trash can next to the door, explaining it was a goner and that I’d just have to chance the return trip.

Thoroughly drenched and pissed, I took the elevator up to the quiet room, set up my laptop in a cubicle, fished a lightweight hoody from my bag, went to the men’s room and changed out of my shirt. When I returned, I hung the wet shirt over the chair’s back, then kicked off my trainers to allow them and my socks to dry out.

As I logged into the wifi with ten minutes to spare, I considered another woeful United runout a certainty given everything else that had already gone wrong on the morning.

Imagine my surprise when the opposite occurred. Eleven strangers, squad players from West Ham dressed up in the Turf Moor claret, I suspect, offered very un-Burnley-like resistance. Which is to say next to none. United enjoyed the run of the park. If they lost the ball, one of Sean Dyche’s charges politely returned it to the nearest Pink Devil.

United wore their new away strip, which briefly tempted me to troll the internet with innuendo that David de Gea, in his contrasting ‘it’s a boy’ blue, didn’t support finding a cure for breast cancer. Lesson learned after the fritter disaster, I refrained. Romelu Lukaku repaid my kindness with a powerful header from a perfect Alexis Sanchez cross to put United in the lead.

To my surprise, United weren’t content. They continued to pressure Joe Hart. The other ten Burnley players allowed it. To be fair to the Clarets, this was their campaign’s eighth match. Europa League qualifying cut their holiday short. With proper rest, they might’ve been in the mid-season form I’d feared. Instead, they were on their last legs. All Sean Dyche could do was hurl f-bombs at Jon Moss for not calling fouls on Chris Smalling, who was draping himself all over Chris Wood on every desperate clearance.

Just before the half, Lukaku struck again, pouncing on a wayward ball that pinged off two Burnley defenders. It was 2-0. Was I suddenly transported back to 2016/17 in that storm?

During the interval, I obsessed that things were going far too well. I’d bet a new umbrella Mourinho was directing United to protect their advantage in the dressing room while Sean Dyche lit a fire under his exhausted crew.

To my delight, neither wager paid off. United continued to press their advantage. Jesse Lingard, who is now taking hair-tinting advice from Marouane Fellaini, earned a penalty. Stymied by the Clarets’ reluctance, United tried to beat themselves. Paul Pogba paid the price for not allowing Lukaku to claim his hattrick; Joe Hart dove to his right to save the Frenchman’s telegraphed spot-kick. If this was still 2017/18, that should have turned the tide.

Instead, Lukaku produced increasingly imperious hold-up play and three near-misses in the box, one a stone-cold penalty denied, as he sought to convert Turf Moor’s travelling end into a haberdashery. Best of all, Jose Mourinho, president of the Reg Varney fan club, chased a third goal, sending Marcus Rashford into the fray.

The 20-year-old was chafing for action, too. Lively was an understatement. Thirty-three-year-old right-back Phil Bardsley found himself stretched further than Reed Richards managing a daycare centre. It’s difficult to blame the former United man for resorting to villainy, tripping Rashford beyond the endline, then giving him a kick while on the ground for good measure. His short stubby, badger legs were no match for a frisky gazelle.

He caught the youngster on the wrong day, however. Rashford leapt to his feet, glued his forehead to Bardsley’s brow and informed him which brand of mouthwash he favours. Jon Moss had little choice but to brandish a red card. United’s new no.10 misses the next two Premier League clashes against Watford and Wolves, as well as the EFL Cup tilt against Derby.

The football gods being ones to ensure there’s enough irony in their diet, he’ll be available for the Champions League opener at Young Boys. In his post-match remarks, Mourinho labelled him a “naive [young] boy.”

Lessons like this must be learned at that age. Wayne Rooney learned them in a red [not pink] kit. So did David Beckham. That’s not bad company. Rash is much skinnier than Luke Shaw, too. Mourinho shouldn’t stay angry with him for too long.

Even down a man for the final 20 minutes, the squad didn’t let up. They pressed Burnley for the duration, enjoying the better chances until Sam Vokes forced a save from Little Boy Blue in added time and Matej Vydra proved he might be as dangerous in the Premier League as he was in the Championship. De Gea had an answer for the Czech, too.

An international break is now in session. Mourinho’s squad dispersed for Nations League matches and friendlies. Alexis Sanchez opted to stick around, though, foregoing the opportunity to meet Chile’s new boss, Reinaldo Rueda. La Roja is off to the Far East to play South Korea and Japan. That’s an exhaustive commute which Mourinho and fans should be happy to see their no.7 skip.

Even so, a fortnight away makes sustaining momentum from the Burnley victory difficult. On the bright side, it might cool off upcoming opponents Watford a bit, although Javi Gracia won’t be missing as many players as Mourinho during the break. While United downed the Clarets, the Hornets stung Tottenham. They’ll be confident when welcoming United to Vicarage Road. Mourinho can’t allow his side ease back into the Premier League grind. They must put the pedal to the metal from the off.

For my part, I’m happy to sacrifice another apple fritter, umbrella and set of dry clothes if it means three more points. Anything for the cause.